Thel's motto:
Does the eagle know what is in the pit,
or wilt thou go ask the mole?
Can wisdom be put in a silver rod,
or love in a golden bowl?

A clod of clay: Thel, the clod, and the pebble

This essay was also published on the blog Masterpieces, in the posts Thel and A clod of clay. It is based on Blake's book The book of Thel and his poem The clod and the pebble. 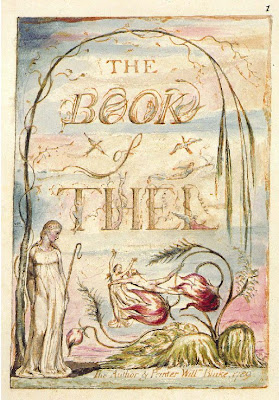 The story of Thel

Thel is the youngest daughter of Mne Seraphim. She and her sisters live in the vales of Har, by the river Adona. While her sisters "led round their sunny flocks", Thel sits at the river lamenting the transience of her life - she's "born but to smile and fall".

A lilly overhears her monologue and answers her. The lilly is more fragile and transient than Thel, but "clothed in light, and fed with morning manna", and when she withers in the summer heat she will "flourish in eternal vales".

This does not comfort Thel. The lilly is food for lambs, her fragrance purifies the air, her pollen are used to make honey. But Thel is like the "faint cloud kindled at the rising sun", she will just fade away and disappear. The lilly then calls down a little cloud to tell Thel why it fades and disappears.

Thel asks the cloud why he does not lament his mortality: "Why thou complainest not when in one hour thou fade away"? The cloud explains that just because he vanishes does not mean nothing remains. By passing away, he gives life to flowers. Thel complains that she, unlike the cloud, has no use, and wonders if she only lives "to be at death the food of worms". The cloud claims that if you are to be the food of worms you do have a purpose, and calls a worm to meet Thel:

The worm cannot speak, only weep, and Thel pities it. A clod of clay feeds and comforts the worm, and then explains to Thel that God even loves a clod of clay, and pours oil on her head, so that she can nourish and nurse the worm. Thel weeps and realizes she has nothing to complain about.

The last section is different in tone than the rest of the poem, and may well have been added several years later. The clod of clay invites Thel to enter her house. She enters through the eternal gates and "saw the secrets of the land unknown, [..]a land of sorrows and of tears where never smile was seen". She wanders around, visits "the couches of the dead", listens to "dolours and lamentations", and finally sits down at her own grave plot. There, she hears a "voice of sorrow" (probably her own) saying:

The voice continues, and when it comes to these lines:

Thel flees back shrieking to the vales of Har.

Blake's mythology is not a complete, consistent, well-rounded body of work (like e.g. Tolkien's mythology), but fragmentary, as if mere fragments of an ancient mythology have survived. The book of Thel does not introduce Mne Seraphim, Adona, Luvah1), or Har to us, but assumes we know them, as if Thel is part of a larger body of work, now sadly lost.

The book of Thel, probably printed between 1789 and 1792, is the second of Blake's longer, mythological poems. The first, Tiriel was written around 1787, never engraved, and not published during Blake's life. Tiriel was the son of Har and Heva. Whether the vales of Har (Thel's home) are named after Tiriel's father is an intriguing question that I cannot currently answer. (I have not read Tiriel yet. The vales of Har are mentioned in both poems.)

Maybe we should not ponder to long over Har, Luvah or Mne Seraphim, but just enjoy the story of this young girl, searching for her destiny, but fleeing from it when she finds it.

The year 1789 is engraved on the second plate of The book of Thel. This is also the year that the Songs of innocence were published. The motto and the conclusion of The book of Thel seem to be from a later date. Apparently Blake changed the ending (and added a motto) while he was working on the Songs of experience (published in 1794).

The clod and the pebble 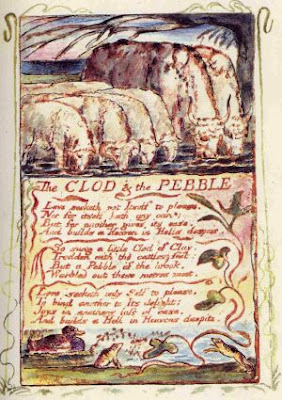 Many poems in the Songs of experience are a reply to or sequel of poems in the earlier Songs of innocence. The clod and the pebble contains both elements (innocence and experience) in one poem. Innocence is represented by the clod of clay, who describes unselfish, Christian love. The consequence of this noble love, however, is to be trodden by cattle's feet.

The pebble's love, on the other hand, is selfish and abusive. Yet the pebble, who represents experience, has the last word in this poem, and he is probably not trodden by anyone. Conclusion?

In Thel, we do learn that there is more to the clod's world than meets the eye (and possibly Blake wrote the conclusion of Thel while working on The clod and the pebble). Her world is "a land of sorrows and of tears where never smile was seen". To be trodden by cattle's feet is the least of her miseries. And yet she nurses and nourishes the little worm, and tries to build "a Heaven in Hells despair".

1)Luvah, merely mentioned in Thel (the cloud claims that his "steeds drink of the golden springs where Luvah doth renew his horses"), returns decades later to play an important role in Blake's later work.

Buy William Blake's Songs of Innocence and Experience from Amazon

The book of Thel
The clod and the pebble